Happy New Year from The Horizons Project! In January we celebrate the legacy of Martin Luther King Jr. and take the opportunity to look back on one of the greatest pro-democracy movements in history, the civil rights movement. At Horizons, we have been taking inspiration from this quote from Dr. King’s book Stride Toward Freedom about the Montgomery bus boycott: ‘Anyone who starts out with the conviction that the road to racial justice is only one lane wide will inevitably create a traffic jam and make the journey infinitely longer.’ This concept of multiple lanes within a movement has been animating our work from the start and was the launching point for two articles we recently released. Chief Network Weaver Julia Roig published a short piece in Alliance magazine on the role funders can play in supporting a broad-based democracy movement; and Chief Organizer Maria J. Stephan emphasized the diversity of participation and the multiple, complementary approaches needed for such movements to be successful in this Waging Nonviolence article.

Dr. King is well known for his leadership in the civil rights movement, but also for his staunch opposition to poverty and economic exploitation. Before his assassination in 1968, Dr. King was organizing a march on Washington called the Poor People’s Campaign to fight for economic justice and equality for the poor in the United States. Today, the Poor People’s Campaign: A National Call for Moral Revival has picked up this unfinished work and is one of the critical lanes within the current pro-democracy movement.

Here are some of the other resources we have been reading, watching, and listening to this month from a wide variety of sources and perspectives:

Ward asks the question “What if we are already winning the war? How do we win the peace?” He calls out the ways in which we are distracted by turning against each other, “the myths of who is to blame for our suffering — the Jews, the immigrants, the trans community… Inter-communal violence (the wedging, for example, of Blacks from Jews, rural from urban, or immigrants along color lines) only strengthens the hand of authoritarians.” He also acknowledges in the article how many other countries have gone through similar challenges and sends appreciation out to some of the Western States Center’s global learning partners, such as Northern Ireland’s Social Change Initiative, the Nelson Mandela Foundation, and the Train Foundation’s Civil Courage Prize laureates.

Organizing for collective impact: Prepared for anything, more effective at everything

by Caleb Christen in The Fulcrum

This is the fourth in a series of articles analyzing how the democracy ecosystem can prepare to support and facilitate a mass movement. Christen stresses the importance of pre-established relationships and their impact on the preparedness of an inter-movement community of democracy and civic health-promoting movements. He highlights the fact that the inter-movement community has numerous independent yet interdependent fields; for example, those working on structural reform, bridging divides, and civic education, and he extols the importance of meaningful, cross-sectoral relationships that need to be established in advance of democracy’s next crisis or opportunity.

by Daniel Golden in ProPublica & The Atlantic

In just over two years, critical race theory has gone from a largely obscure academic subject to a favorite bogeyman of the MAGA faction. The anti-CRT efforts have quickly expanded from sloganeering to writing laws and seven states, including Florida, have passed legislation aimed at restricting public colleges’ teaching or training related to critical race theory with very real implications for professors as outlined in this article. “Those laws face impediments. On Nov. 17, 2022, a federal judge temporarily blocked enforcement of the higher-education provisions of Florida’s Individual Freedom Act. “The First Amendment does not permit the State of Florida to muzzle its university professors, impose its own orthodoxy of viewpoints, and cast us all into the dark”, Judge Mark Walker wrote. The DeSantis administration filed a notice of appeal on Nov. 29 and is seeking to stay the injunction pending that appeal. The 11th Circuit, where most of the judges are Republican appointees, will hear the appeal, with briefs to be filed in the next few months and oral arguments potentially this coming summer”.

Get Religious Fundamentalism Out of the Classroom

By Jill Filipovic in Slate and Her Newsletter

Jill Filipovic places the recent controversy at Hamlin University within the context of religious fundamentalism encroaching on education. She presents a snapshot of the facts on the ground and failures by institutional leadership and the student press. She argues that claims of harm and trauma must be evaluated at some level and responses must be proportional to objective harms. Failing to do this allows for those who claim trauma to impose their will on the larger society and these attacks on the liberal value of free thought has opponents across the political spectrum.

What if the January 6, 2021 Insurrection Had Succeeded?

Rising Up With Sonali

This month, we also commemorated the anniversary of the January 6th insurrection and attack on the US Capitol, and some are asking “What if?” What if the election results had been overturned? What if Donald Trump were illegally installed for a second term as president? These questions are the basis of a new graphic novel: a 4-part series 1/6: What if the Attack on the US Capitol Succeeded? released together with Western States Center. The first installment imagines an alternative timeline where the pro-Trump mob succeeded in overthrowing the election results and imposing martial law. Check out Sonali Kolhatkar’s interview with the co-authors: Alan Jenkins, writer, Harvard law professor, and human rights advocate; and Gan Golan, activist, illustrator, and New York Times bestselling author.

Vaush Joins TYT to Discuss Why Young Men Feel Alienated in the U.S.

This is a thought-provoking and important conversation with Twitter streamer Vaush and Ana Kasparian on TYT’s nightly newscast, discussing ways “the Left” is out of touch with young men. The video broadcast focuses on the rising crisis of loneliness and social isolation facing young men in the US and ways progressive activists could be further inflaming the problem.

From January 6 to Ephesians 6

On the second anniversary of the January 6 violent assault on US democracy, the American Enterprise Institute and the Seymour Institute for Black Church and Policy Studies held a public webinar, sharing reflections on the role of religious leaders and faith communities in protecting democracy. Rev. Eugene F. Rivers III was interviewed on his life in ministry and his inspiration behind assembling faith leaders to pray for our nation and model healthy public discourse on contentious issues. Jacqueline C. Rivers then moderated a panel discussion with AEI’s Robert P. George, Mary Ann Glendon of Harvard Law School, and Rev. Cornel R. West of Union Theological Seminary. Dr. West took the opportunity to name the fundamental structural features of fascism and our joint responsibility to confront fascism wherever and whenever it appears.

NETWORK, a Catholic leader in the global movement for justice and peace hosted a webinar series entitled “White Supremacy and American Christianity” that featured Fr. Bryan Massingale S.T.D., one of the world’s leading Catholic social ethicists and a prominent African American theologian, and Robert Jones, Ph.D., the founder and CEO of the Public Religion Research Institute and author of White Too Long: The Legacy of White Supremacy in American Christianity. Marcia Chatelain, Ph.D., a professor of history and African American studies at Georgetown University and the leading organizer behind the #FergusonSyllabus, joined the second conversation.

Check out this “in-depth examination of the culture and politics of Christian Nationalism and Evangelicalism by two ex-evangelical ministers-turned-religion professors. As former insiders and critical scholars of religion, Dan Miller and Bradley Onishi have a unique perspective on the Religious Right. Guests have included Chrissy Stroop, R. Marie Griffith, Janelle Wong, Randall Balmer, Katherine Stewart, and many others”.

Ending Toxic Polarization Starts with You

Columbia University psychology and education professor and author Peter T. Coleman discusses recommendations from his book, The Way Out: How to Overcome Toxic Polarization, evidence-based practices that everyone can do on their own- or with a group- to help recalibrate assumptions, and re-create bonds with people you disagree with. Coleman also partnered with the organization Starts With Us to turn the lessons from the book into an online challenge, called Finding the Way Out. It’s like an exercise routine, for strengthening compassion muscles.

John Wood Jr., National Ambassador for Braver Angels, has launched a new podcast series based on his experience living at the intersections of race, class, politics, and faith. With discussions that focus on rebuilding trust between the American people and saving American democracy, his intention with the podcast is to challenge, and humanize, some of the leading and most controversial figures in our politics and help bring more people into a pro-democracy movement.

At the End of the Year: Guided Reflections Across a Transitional Threshold

At the beginning of 2023, did you reflect on the past year and make any New Year’s resolutions? There’s still time to set your intentions for the coming year! This article by Andrea Mignolo offers a nice framework with prompts for reflection and inspiration for the year ahead. 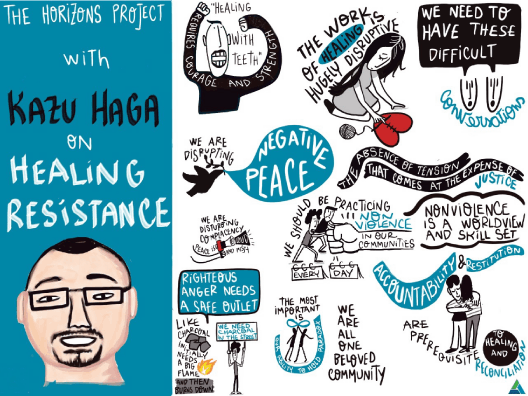 
Nonviolence is a cornerstone of activism and radical change, but less attention has been given to the restorative power of nonviolent resistance. In this recent Horizons Project event, Senior Advisor...


This article was first published on Just Security. The January 6th hearings have exposed a fundamental truth about authoritarianism: that it ultimately depends on the consent and acquiescence of individuals....


Since our official launch in January of 2022, the Horizons’ team has spent the bulk of our time building relationships with the many inspiring organizers, network leaders, researchers, and funders...